Do the Loki-motion with me 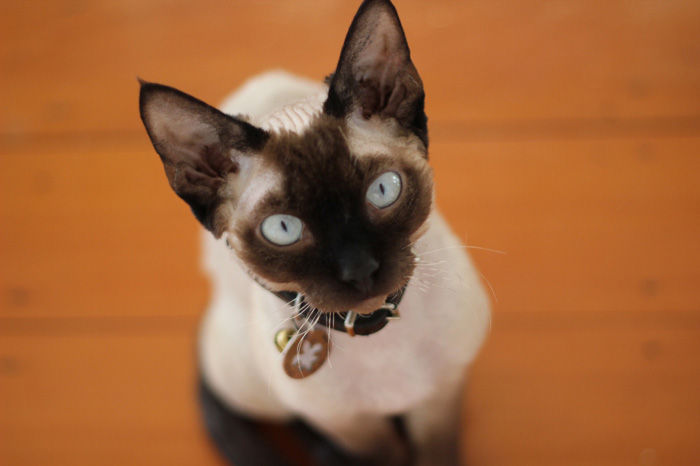 I’ve been getting a lot of questions about my little pain in the butt recently, so I thought I’d answer a few questions and give you some info on the smallest, furriest man in my life…

I’ve always had lots of pets throughout my childhood, so when I moved out of home and into a rented house that didn’t allow pets, I really missed having some furry critters to come home too (housemates don’t count). So I devised a brilliant plan to get a pet. A hairless cat, I reasoned, would be a great selling point for low impact pets. I won my debate with the landlord to let me have a cat. It went something like “Can we have a cat?” “A cat?…. Sure. Just make sure you get the carpets cleaned before you move out”. Yeah. It was an epic argument, that’s for sure.

So, trust me, I chose the most expensive breed and had to drive 3 hours out of the city to get my cat. But that’s another story for another time.

I love love LOVE Loki. He is the most adorable, psycho, brilliant, stupid, hyperactive, stubborn and affectionate cat I have ever had. Sometimes all at the same time.

Funny Traits:
~ He hates closed doors. If a door is closed he needs to be on the other side of it. If you don’t latch the bathroom door, he will push it open and join you.
~ Loki loves cardboard. No Really, he has two cardboard boxes and he LOVES them! He rips them up and bits peices off and eats them. We have to watch him because he loves sticky tape just as much.
~ He’s gotten better, but when we first got him the damn cat ate everything! We went through three Wii Sensor bars after he ate the cords, I lost straps from my singlets, anything small enough to eat or chew on was lost.
~”Speaking” to us. Especially when he’s getting comfy he lets out these little chirp noises. Also, he has the loudest purr in the world. It’s hilarious.
FAQ:
Where did his name come from?
Honestly? It was just a name that I liked. If you want to get into the History behind the name, I know the name from one of three places:
1. Loki is the Norse God of Fire and Mischief, the latter actually being quite fitting for my cat.
2. The Comic book series Thor - Loki is the adopted brother of Thor and eventually his nemesis.
3. The movie Dogma - Loki is one of the two fallen angels who have taken it upon themselves to rid the world of ‘evil doers’
For me, it was one of the names that I liked for a cat when we got him, but it was more my backup name. After 2 days, it became evident that no other name we could think of really suited him, so Loki kind of won by default. I have no regrets though ;)
What kind of breed is Loki? Is he a Siamese?
Loki is a Devon Rex, kind of in the same family as a Spinx in that he has barely there fur. He is by no mean’s hairless, but the the fur that he does have is just ‘down’ fur or an undercoat. Its actually SUPER soft, and he does gets ‘shaggy’ in winter  - by which I mean his hair gets long enough for him to almost look like a regular cat, but it can be patchy and it has this fantastic curl to it. Loki has the Siamese colouring (making him whats called a Si Rex). During this time he does malt a bit, but still much less than a regular cat does.
I want to get a Devon Rex, are they good pets?
My advice about Devon Rex’s is, aside from costing from about $600-$700, they can be high maintenance. Loki is very self sufficient as most cats are, but he loves to be around people and he hates to be left alone. To this end he will cry outside the bathroom door if you leave him alone outside the room you’re in. He is prone to demanding attention, and will follow you around crying until he gets fed (and I mean relentlessly). They have a lot of energy and can be destructive, so toys and scratching posts are a must.
All of that said, they are super affectionate and loves pats and scratches. Loki curls up on mine or the boyfriend’s lap every night when we sit down to watch tv. They are really smart and can be taught tricks like you would a dog. Loki knows how to sit, and knows he has to sit down neatly before he will get his dinner every night.
They have loads of personality and will keep you entertained for hours. They love to get into any space that can hold them so shelves, boxes and drawers will be regular hiding places. They also love to be the highest point in the room and will go to great lengths to climb even people (they are known for sitting on peoples shoulders).
These are all just my experiences with the breed, you might have your own opinions. Either way, I love the breed and my little guy :)