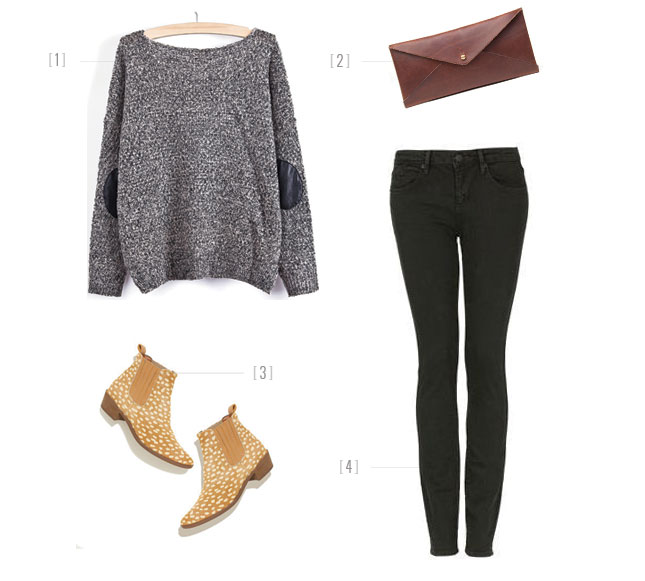 While I’m sure many of you are itching for summer to begin again, I can’t wait for it to end. Sunny weather is lovely and all, but I feel so much more at home in a slouchy sweater and a pair of boots. Wishing it was Autumn all year round so I could wear this outfit everyday…. (and trust me, I totally would!)

ASOS have the most awesome collection for Halloween, complete with spooky onsies and accessories. I’ve been filling up my cart with things I’ll probably never use, but apparently need to have! (Especially a clutch with bat wings. That thing is AWESOME!) 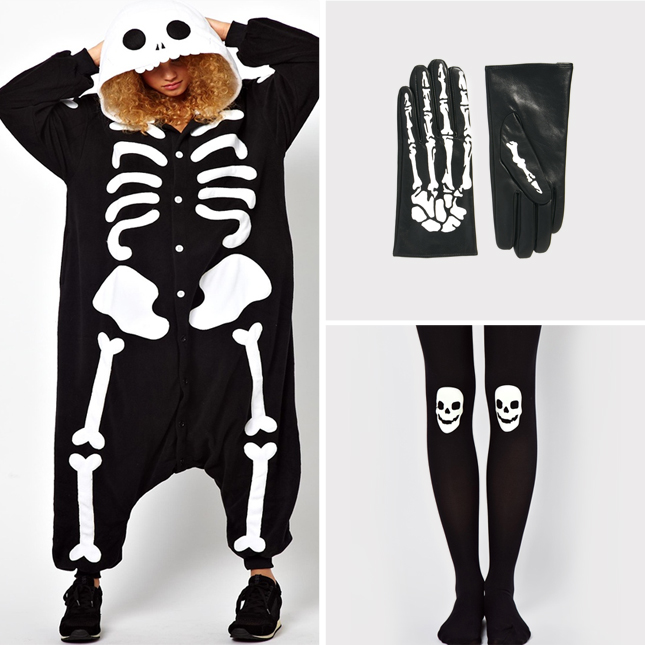 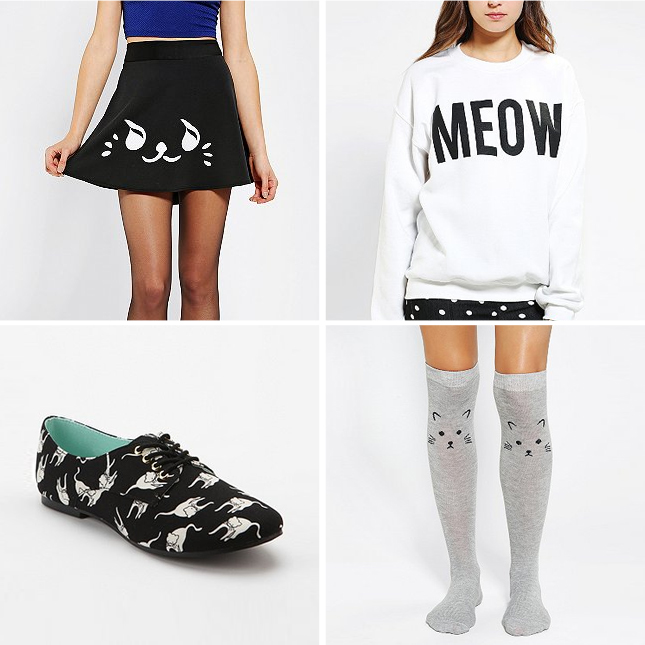 Heeeeeere Kitty, Kitty, Kitty! I want you in my wardrobe!
Check out the adorable kitty fashions I came across this week.

I can’t explain it, but lately it seems everywhere I turn I’m being linked to yet another store selling amazing, colourful socks and tights. Sites like Stance and Hansel from Basel have given me a new love for socks! Of course, it being the beginning of winter doesn’t help my new mini-obsession, but hey, at least I have a valid reason for spending outrageous amounts of money on socks… right? Florals, Fruits, it’s all the same to me! When I spotted this Vivid blouse  from Samantha Pleet‘s  Fall 2012 collection (and hot damn do I love mid length sleeves on a blouse! Is that weird?) all I could think of is pairing them with a pair of the Citrus and Peach Strathcona Stockings. So maybe, they wouldn’t really go together. Maybe if I tried to  pair these up in an outfit, I would like like those strange old ladies you see on the bus who wear whole outfits out of the same fabric. Perhaps even, I’m thinking way to much about this. I don’t know. What I do know is; I’m totally crushing on this fruity/floral-y pair! The Balletcats are bold, sometimes dark and always quirky. For cat lovers (without the usual stereotypes), the designs showcase a stunning and powerful culmination of cute and creepy imagery, mixed together to create something completely unique.

When I first discovered the Indonesian based Balletcats a few years ago, the cat lovers of the world had already gone gaga for the dark, feline inspired designs.  The sweatshirt that had taken the internet by storm was already sold out, as had most of the first collection. Smitten with everything I was too late to buy for myself, I settled for signing up for the Balletcats newsletter, vowing that as soon as a new collection was released I would be first in line.

Early 2013, I received that wonderful email I had been waiting for. The announcement that The Balletcats would be back with a new collection, featuring both old and new designs! I reached out to (the totally lovely) Jordan Marzuki, the creator and designer of the Balletcats, to have a chat about his designs and what was in store for the future of the Balletcats… First things first; who are The Balletcats? Where did the name come from? How long have you been designing?

The Balletcats is a brand that takes on different views on what it is like to be a cat lover. It is not all about the cuteness or some random cat who plays keyboard. It is all about the reality on how we treat our mysterious little furry friends.

The name itself is inspired by our cat named Shiro in the past that have the typical ballet posture when he’s asleep! I’ve been designing generally since high school, from the simple things like drawing patterns on my friend’s clothes and textbook covers. Then I entered a t-shirt design competition through Threadless.com, which I ended up winning, which was the start of what I’ve been doing now.

In my head I imagine your home and studio crowded with feline friends diligently sewing sweaters and tshirts. Do you have cats of your own (and do they know how to sew)?

Yes, In fact there are 5 new born kittens! but really, it’s not what people imagine about the designer of The Balletcats that probably thinks I spent times alone in a room with 100 cats just like a scene in Clockwork Orange. Most of them are adopted and very ugly kind of cats, don’t expect to see them Youtube videos.

Your designs are often based on wonderful use of dark humour and imagery. What is the inspiration behind your designs?

My inspiration comes from my sick and unearthly imagination. It’s really hard to specify what it is, but I think what takes the biggest part of my works is probably my childhood itself. I remember one time, when I was about 8 year-old, I participated in a junior drawing competition where most of the kids there had just drawn some imagery of beach, mountains and any other kind of beautiful things - and I drew some gruesome scene of war. I can’t really explain what happen to my brain that time, but it seems to continue to happen to me until today.

What is your design process? How long between the idea conception and finished product? Do you make all your products yourself?

Occasionally I come up with very very raw ideas and I always take notes almost everywhere. Even though I design by myself, I always speak with various people, from different backgrounds, mostly the one who are not into design and arts. The hardest part is the execution, most of the products I make are very different from the first approach. Did you know the first draft of “The Entire Cat Population is My Bestfriend” is “In the land of pussies, I am the king”, which sounded a little bit douchey by the survey. What made you decide to take your designs online?

To be honest, because it way easier than setting up a physical store. It will helps me to focus what I’ve created and saves a lot of time and energy. I’ve always embraced the convenience of internet where it is easier to get exposure.

Your fantastic sweatshirt “The Man With His Words” (ie; ‘The entire cat population is my best friend’) practically went viral! Were you overwhelmed by the attention it received? I know there were a lot of ‘copycat’ versions floating around after it became so popular. How do you deal with people effectively stealing your work?

Thank you for saying that! It happens anywhere. Although I felt very irritated, I always try to act mature and move on. Most of the time it is my my customers who will do the job to make them [the copycats] spiral into a pit of shame.

You obviously have a huge following, what is it like to have so many fans? Do you get ‘fan mail’? Where is the furthest away (or strangest place) you have sent an order too?

Haha, not huge, but at least they love cats and most of them are the right audience target, that keeps me going. I remember on the old site that instead of “guestbook” there was a section for consultation, where customers can leave their problems and most of them are childish, wrong and sick! The furthest away probably is from Rio, Brazil and have this most patient customer ever because it takes 3 months for the package to arrive.

I visited Indonesia a couple of years ago and found so many wonderful independent designers and creators. How would you describe the creative community in Indonesia? Do you many local designers have the success that you’ve had?

That’s really nice, indeed most of big cities in Indonesia have their own distinctive scene that conscious on the latest trends. Yes, very many of them gained the international recognition! But the term ‘success’ here is probably relatively different for each designers/artists. There are the ones who pursue the dollar bills, and there’s always the ones who prefer having a good portfolio of their designs.

What does the new and improved Balletcats store and website have to offer? Can we expect to see some of the old favourites re-appearing?

The website itself offers simplicity and tries to cater to what I have in mind rather than for what I sell. I always wanted to have older target audience, so the new website will be more polite than usual, I hope that works.

Yes, I will bring back “The Man With His Words” from the number one, a typographical series that stole the heart of crazy cat ladies around the world.

What does the future hold for The Balletcats?

For now I want The Balletcats to become what it is right now. It may grow but still with the same approach and mission :)

I’ve been finding inspiration for DIY projects everywhere lately. It’s great! Sometimes I find it really difficult to come up with new projects. I was feeling that way the beginning of the year and was only making things here and there, but the last few weeks I have bee on a serious roll! Especially with fashion DIY, which I have to admit, I don’t do a lot of. I spotted these three shirts from Zara and I’ve already jotted down a few ideas…

If I could be, I totally would be. I’m a little jealous of all the South bu South West  stories I’ve been hearing, and all the fabulous fashions I’ve been seeing. Did you go this year?

It’s edging into the time of year where I start getting obsessed with scarves. I don’t know what it is, but I just love em! I think it’s because I finally live in a climate where its cool enough to wear them for part of the year. More than that, a good scarf just really brings an outfit together. Don’t you think? I received my order from Chic Wish today and now I’m kind of wishing it was winter already so I could put on this guy and be snuggly and warm. It’s put me in the mood for fabulous over-sized sweaters. So effortlessly cool and the easiest way to cover a multitude of ‘sins’ ;)